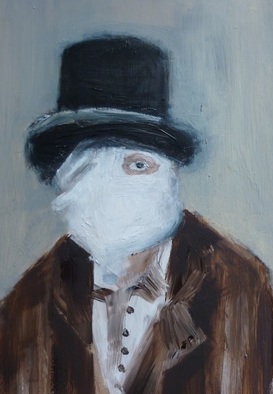 Corinna Spencer's interests lie in the fragments of stories that can be found in historical images. Making large groups of paintings which can then be assembled to create new stories of mystery, romance and drama. Hinting at the old and more recent. The nostalgic and romantic.

For Tainted Love, Spencer has created a shrine-like group of paintings exploring the relationship between two historical characters. A relationship that began as a teenage fascination and hero worship but became one of obsession, envy and lust that ultimately ended in betrayal and murder.

The Assassination of Jesse James by the Coward Robert Ford is  '..about the idea of approaching death but also about, I think importantly, the idea, that the character who is going to kill Jesse James, is in a very modern celebrity conscious kind of way, obsessed by him.' Mark Kermode.