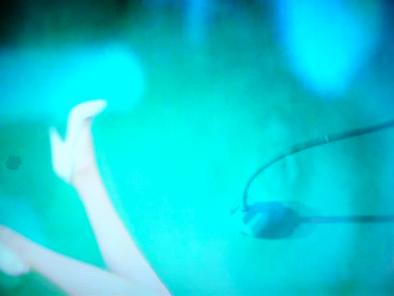 Faint outlines crossing over each other, intertwining blue wobbly lines, an eye, a nipple, labia, penis, lips, nose? From Buchanan's drawings we can start to piece together the sexual act from its isolated ingredients. The line leading us from one to another, on its way making new titillating connections, and drawing us into its world. The erratic lines start to create a new anatomy of some recognisable and other new bodily parts. We become the excited voyeur, our eye led from lip to knee to breast, creating a unique sexual configuration. The eye, the biro, the viewer, the artist, all merge, and together, like a tentative finger we slowly caress and explore what we see before us.

The continuous line dribbles from the biro as it makes love to the paper through the drawing process. The biro becomes an extension of the sexual organ, ejaculating onto the clean white paper. The hand as the memory of the act works in unison with the biro to create the image. The drawings become a mixture of the remembered sexual encounter and evidence of a new sexual creation. Each subtle movement, nook, and twist of the line becoming a new erogenous zone, in its creation, and also in its viewing.

The orgasmic biro spill traces its shuddering climax across the page. Gasping white spaces where the line stops, a sharp intake of breath before the frenzied drawing starts again. Line enters line, rolls around, turns back and attacks itself.  The drawing so caught up in the act that all regard for its own boundaries, edges and reality is lost. What started as sex itself, became stored in the memory, and then expelled onto the page, a messy yet enchanting version of the original enchanting yet messy act. The sprawling shapes trying not only to capture the constant movement, thrusts and convolutions, but the artists involvement in its creation too. As we encounter the work, what at first seems a delicate and insubstantial sketch quickly starts to quicken the pulse as we stitch together its intentions with our own memories.

Like the heroine in The Story of O, Buchanan is blindfolded to draw and is lead into a world of sexual stimulation, adventures and discovery. Down corridors in the castle of her imagination, revisiting partners, pornography and encounters until the start to merge as one, situations spanning the real and the imagined. Through the absence of the visual she feels out her drawings, at once awkward and enjoyable, like sex itself.

Paul Kindersley is a film obsessed artist/stalker/curator currently living and working in London.