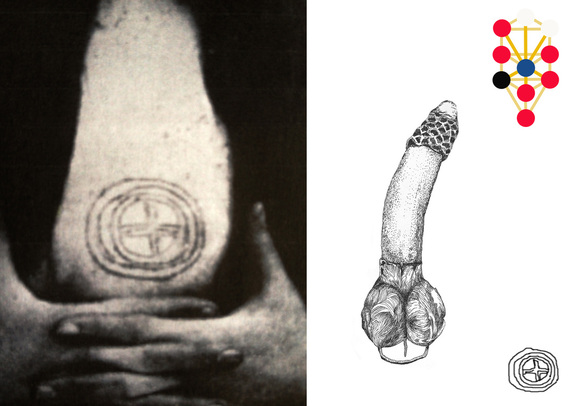 _ For the last four years Hayley Lock has been developing a series of works depicting characters from her imaginary world. Pseudo sexual characters adorn behavioural oddments through a terrifying back - story of historical events as yet untold, titled Imperial Leather. Derived from snippets of overheard conversation and appropriated images, Lock's works weave new narratives of history and myth through a complicated and sometimes mysterious tale of heartache, lust and delusional thinking.

For Tainted Love Lock has looked closely at the intriguing relationship, both real and imagined of the occultist Aleister Crowley and his vixon Leila Ida Nerissa Bathurst Waddell, known affectionately by Crowley as L.A.Y.L.A.H.

Branded by Crowley between her breasts with the ‘Mark of the Beast’ Lock looks at notions of obsessive love through ritualistic and imaginative belief systems citing known Crowley quotations with symbols of re-creation and violence. Recognising Stendhal’s theory of crystalization as a journey of romantic love, Lock uses the relationship of Crowley and L.A.Y. L. A. H to reiterate that falling in love can be deemed a form of mental illness containing irrational thoughts, obsessive behaviour and sickness at best. Lock marks bodily and outer bodily experiences to fuse common thought forms and anecdotal behaviour through digital manipulation of appropriated images, drawings, objects and repeated ritualised symbols of Pan, the god of the wilds and lover of nymphs.