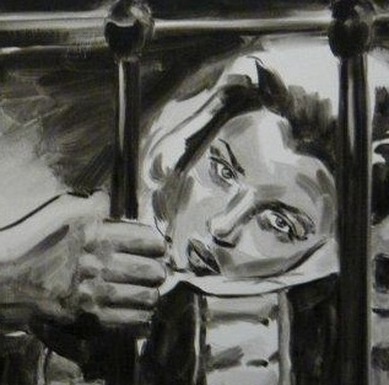 Alli Sharma explores notions of identity, memory, longing and loss by taking an ambiguous glance back at her own history, unearthing memories to create revealing, gestural paintings that transform overlooked subjects into painterly icons.

Grounded in the everyday, she is interested in our emotional relationships with things and the stories we tell ourselves about our lives. Whether discarded ornaments, postcards from the zoo or pawnshop jewellery (image), her loose, revealing paint-marks boldly attempt to capture mementos of forgotten days, reflecting and contemplating things loved and longed for with a mix of humour and melancholy.

For Tainted Love, Sharma examines her own cultural identity with a new series of paintings based on the record sleeves of her adolescence. The Smiths represented an important alternative, independent band in 1980s Britain, developing loyal fans and cult status. Morrissey’s humorous, poetic lyrics combined politics, rebellion and regional pride with romance and unrequited love. Rarely the subjects of pop songs, he brutally articulated situations and feelings rooted in ordinary experience. The Smiths artwork has a distinctive style, featuring film and pop stars that reveal Morrissey’s own obsession with Englishness and icons of popular culture from the 1950s and 1960s, including Shelagh Delaney’s play A Taste of Honey, singers Billy Fury and Sandie Shaw, and Patricia Phoenix from TV’s Coronation Street.