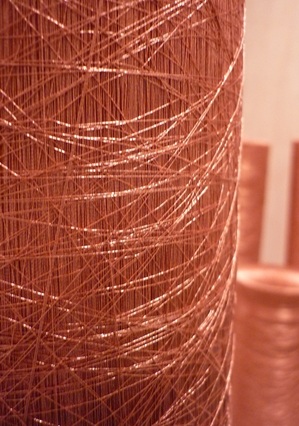 _Alice Anderson often refers to her own life as a starting point of her work where she explores time and memory. Taking the act of remembering as a creative process where memory constantly changes. Her sculptures are the outcome of performances generated by special gestures or experiences she re-does today but which initially took place in some forms during her childhood.

The dolls hair material is retaining Anderson memories referring to the rituals completed as a child with her own hair and threads which was probably standing as a transitional object at the time. Rich in metaphor, it became later autobiographical representing positive attributes of protection and healing.

Devoted to this non-traditional material, Anderson explains that during the fabrication she obsessively repeats actions of dividing and separating the material itself. By stretching, by spinning, by creating tensions and by the permanent action of the weight, she creates endless skins allowing her to bound objects.

When I am bounding something I am in fact trying to hold on to something after a series of loses. I want to protect objects to make them safe and beautiful.

Recently Anderson started to bound hundred of dismantled windows with dolls hair material and has created variable protective architectural elements such as walls, columns, enclosures and grids. The blocks are arranged with minimalism but the irregularities of the handmade brings humanity into geometry, body into space, safeness into word.