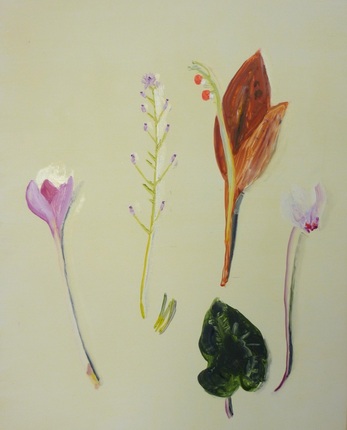 _ Annabel Dover was born in Liverpool and educated in Newcastle and London. She is currently studying for a PhD at Wimbledon College of Art, exploring a practice lead response to the cyanotype albums of Anna Atkins. A regular exhibitor in the Jerwood Drawing Prize, she has shown her work nationally and internationally, and her next solo will be hosted by English Heritage at Darwin’s House. The Imperial War Museum has recently acquired a set of her cyanotypes and the same work will be featured in Carol Mavor’s upcoming study, Blue Mythologies, published by Reaktion. She is a regular contributor to Garageland magazine and is represented by Transition Gallery, London.

Throughout her practice she finds herself drawn to objects and the invisible stories that surround them. Through their subtle representation she explores their power as intercessionary agents that allow socially acceptable emotional expression. The work presents itself as a complex mixture of scientific observation and a girlish enthusiasm which is candidly revealed in her touring lecture Stardust Memories.

My childhood, whilst seemingly on the surface to be of a functioning middle class family, was spent with parents who indulged in drama and abuse, where the truth was impossible to decipher and where the objects that surrounded my sisters and I were often the only witnesses to ludicrous acts of fantasy and violence.  Annabel Dover, Stardust Memories _