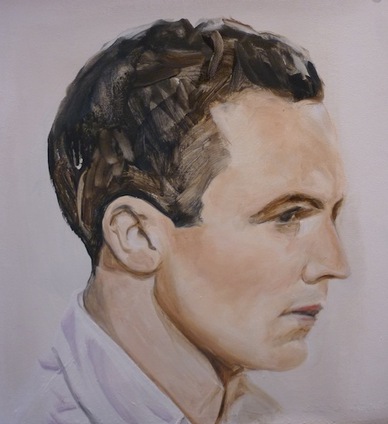 Cathy Lomax's work is rooted in the romance of popular culture, assimilating media fictions and mythologies of fame and juxtaposing them with personal identities, secrets, and the everyday, to create a seductive visual narrative. Photography, often the source of imagery, is reconfigured to create a wish-list of popular and obscure icons - particularly from English history and contemporary culture. Her work is often realised as groups of paintings, which may be combined with other elements to form fragmented stories that chart a curious contemporary longing for something unobtainable.

For Tainted Love Lomax is painting strips of beautiful men from Elvis to Robert Pattinson via Laurence Harvey, Marlon Brando and Gene Kelly. These images, culled from her extensive collection of  film stills, are methodically organised according to the placement of the star's face and accompanied by a Beautiful Men zine.

The sixteen most beautiful men (in profile) is a Transition Tranzine by Cathy Lomax.  It's launch coincides with the opening of  Tainted Love and can be found at Transition gallery and on line in the Tainted Love shop, here