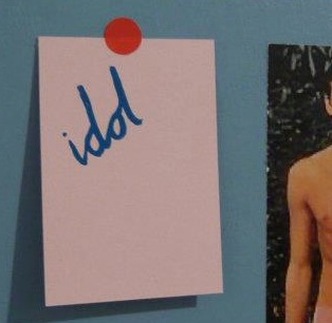 _Paul Kindersley's work is situated in the spaces created between viewer and film. Exploring and blurring the boundaries between fantasy and reality, the personal and the public, suggesting a fluid involvement with mythologized film experience. Playing with an individual, amateur interaction with constructed glamour, celebrity, icon and stereotype and creating an uneasy reversing of the fan/artist positions, so it is no longer clear or important where lines are drawn. A liminal place of borderline existence, anchored in a shared pop culture reality. Kindersley utilises everyday cultural encounters as a storehouse of props with which to populate a reality that is striving to make sense of the everyday. Clues that are trying to decipher themselves and emotions that are searching for a formula.

Creating rooms, installations, sets, and constellations of found objects and images, arranged and filtered through convoluted and esoteric amalgams of histories and personal experiences. Places that confuse the roles of voyeur, madman, co-conspirator and obsessive fan, familiar yet uneasy backdrops into which the viewer is implicated. Completely recognisable, yet stripped of context, charged yet ultimately incomplete. A moment, removed from its narrative, carefully set up and captured, like a publicity still, with the responsibility of encompassing an entire character and storyline.

The performance element is, if not acted out, always suggested in his pieces, they are props, which could be left over, or yet to be used in some ritual. Objects placed in relation to one another, suggesting an intertwined movement or dialogue. They are pieces that long for something or someone, desiring a completion. Offering but never fulfilling a suggested narrative, one that can only be completed when the work re-enters a shared culture imagination. The interaction with the prop leaving behind a lingering residue. The hand and its marks are ever present, suggesting an interactivity and impermanence.